On September 28th the annual BMW BERLIN-MARATHON will be held in Berlin, Germany. With more and more participants on inline skates from various countries around the world, Rollerblade® is proud to be a main sponsor. Each year there are more skaters joining the BMW BERLIN-MARATHON with a background in casual and recreational skating. Riders join the race for a fun and social experience, while trying to set a nice time on the clock as well.

Mark (Race Director for the BMW BERLIN-MARATHON) and Julia (Event Manager: Organization Inline Skating ) are busy with the preparations for this years event, but managed to make time to have a quick chat with us.

Q: Why did you decide to add an inline marathon to the program?
A: In the mid-nineties, inline skating was a huge trend and we got more and more requests from athletes and the scene to integrate an inline skating race into the running marathon. Also the kids in the mini-Marathon already did the last 4.2195 kilometers of the course either in running shoes or on skates, so we decided to give it a try at the full distance and started the first race in 1997.

Q: How did the first inline marathon go?
A: In September 1997, 446 skaters participated in the successful premiere of the BERLIN-MARATHON Inline Skating. The race still took place on the same day as the running event.The two first winners came from France, where inline skating was already much more popular than in Germany at that time: Pascal Briand and Caroline Jean. We already had some experiences from the first Berlin Half Marathon in spring where the skaters completed the 21 kilometers on a course with a 180 degrees turning point and where we realized how fast they where. So it definitely was a logistic challenge for us.

Q: There have been a lot of exciting races, which one is the most memorable for you and why?
A: Almost every race has a special moment for everyone involved, so it’s hard to pick one specific.

Mark: Planning and organizing the very first inline skating marathon in 1997 is one of the most memorable events for me. For a lot of colleagues and volunteers it was something new and not everyone was sure how to handle these fast new participants on wheels. But everything went well and I was pleased that we could offer their sport a new home.

Julia: Seeing Bart Swings breaking the one-hour-barrier for the first time in 2013 was definitely a special moment. One year before, Ewen Fernandez and Bart Swings dawdled on the last 100 meters and enjoyed the celebrations, so they missed the record by four seconds... and we had to wait again for one more year.

Also 2011 was very special for me. It was the first marathon where I was in charge of the inline skating race. On the same day, Alex Uphues, the former organizer of the inline marathon, from whom I have learned everything that I do today, died on his bike trip around the world. We had two fantastic winners, a lot of happy skater finishers, the sun was shining the whole day, and the runners had a world record. A weekend of mixed emotions....

Q: We see more and more amateur and fun skaters entering this race. Can you explain why?
A: For the main part of the skaters, participating in the BMW BERLIN-MARATHON is all about the experience, the finish time only plays a minor role. With around 5,500 participants, it is the world’s largest inline marathon. There are not many places where you can skate on 42 kilometers of open road in the heart of an European metropolis, cheered by spectators and music groups all along the course, together with like minded people and share your passion. Moreover, it is a manageable sportive challenge and a way to finish a marathon distance for everyone who is not able (or doesn’t want) to run a marathon.

Q: What is the feedback from the participants who ride the BMW BERLIN-MARATHON?
A: Most of the participants are super excited and happy after crossing the finish line. A small part sometimes complains about the dense field of skaters and rough manners in the first starting blocks, because they are not used to it. From time to time, also things from our side don’t work out as planned. But we give our best to make everything event as smooth as possible and most of the time, the participants reward it with a smile on their face and their registration for the next year.

Q: If skaters are planning a visit to ride the BMW BERLIN-MARATHON, what is the other thing they can’t skip in Berlin?
A: There is a lot to discover in Berlin. It is an amazing city – and it’s ever-changing. For skaters, of course the spacious Tempelhofer Feld is worth a visit (or a training session). The well-known Brandenburg Gate is part of the race course so they don’t have to spend time on visiting that. What stands out in Berlin is the old and new being so close together. On one corner, you can admire an old building with an eventful history and a museum inside. On the next one you see modern, high-end architecture with a restaurant offering Poké Bowls. Every “Kiez” (district) is unique and offers a whole bunch of different activities, museums, clubs and restaurants. So it’s best to pick only one or two per stay and explore them thoroughly.


Find out what Rollerblade® has in store for you for the BMW BERLIN-MARATHON. 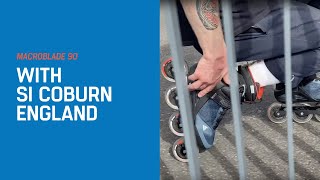 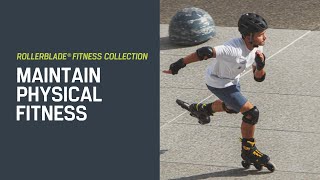 Why I Love Inline Skating 7/8 – Esmee